09:00 am Meet your English-speaking guide at Le Grand Large St Malo and departure by coach

10:00 am Arrival at Mont St Michel, a granite island about 80 m (262 ft) high. It is the most visited monument in France. The mount is usually to be seen surrounded by huge sand banks. The movement of the tides in the bay is very significant and the difference in the sea level between high and low water can be over 40 ft, the highest in France. 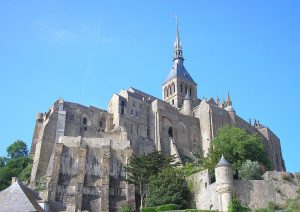 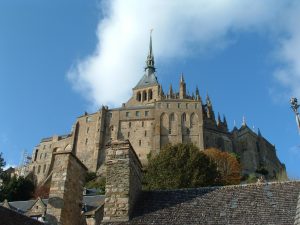 The Abbey’s origin goes back to the early 8th century when the archangel Michael appeared to Aubert, bishop of Avranches, who founded an oratory on the island, until the 16th century, a series of increasingly splendid buildings in the Romanesque and then the Gothic styles succeeded one another on the mount. The well-fortified abbey was never captured. In the Middle Ages, Mont Saint Michel was one of the most important pilgrimage site. In 1811, it was converted into a national prison and has been listed as a national monument since 1874. Since 1969, a few monks have returned to reside on the mount again, conducting services in the abbey church. 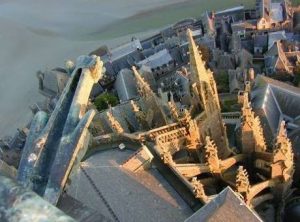 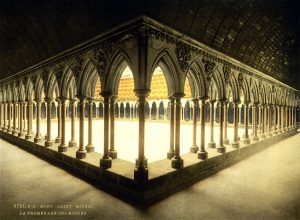 10:45 am The tour does not go from building to building nor from period to period but from floor to floor through a maze of corridors and stairs. You will visit the abbey church and “La Merveille” wonderful building of Gothic architecture going back to the 13th century, e.g. the refectory, the guests’ hall and the knights’ hall.

Free time for walking along the main road of the medieval city lined with souvenir stores or along the ramparts from where you may admire the view over the bay of Mont Saint Michel and the peninsula of Cotentin.

Departure for a tour along the bay of Mont St Michel showing you many different marvelous landscapes. All along the bay, famous for its fishing grounds, you will discover oyster and mussel beds. Oyster breeding is an activity carried out on 375 ha by more than 500 firms. It demands hard work which occupies an important part of  the  population living in the bay.  Every year, 3 000 tons of oysters are sent out all over France and abroad, more than half of this amount being delivered around Christmas time. Mussel breeding is also an important activity in the bay. Mussels grow on oak trunks planted in the sea (called “bouchots”). At low tide, there is a possibility to see a forest of trunks (more than 250.000) stretching over 12 km. An average of 10.000 tons are delivered all over France.

Following the road, you will discover polders-land which has been taken from the sea using the same methods as the Netherlands. 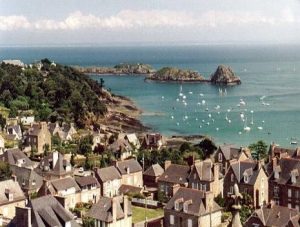 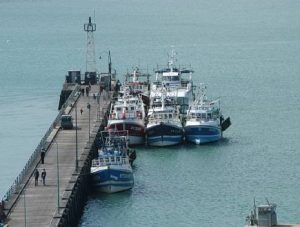 Free time on the port la Houle, a bustling animated area, especially at high tide with the fishing boats coming in. At low tide, view over the oyster beds.

Visit of an oyster farm.

Return to Saint Malo via the coastal road, stop at Grouin point, a wild rocky headland overlooking the sea from a height of 40 m (131 ft). In clear weather, marvelous panorama, point of departure for wonderful walks on the ancient sentier des douaniers as well as Iles des Landes, a bird sanctuary and nature reserve.